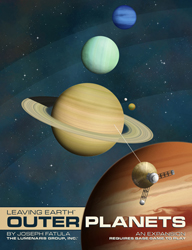 Explore the giant planets of the outer solar system all the way into 1986 in this major expansion for Leaving Earth. Visit the four great moons of Jupiter, see the rings of Saturn, search for life on mysterious Titan, and fly by the distant planets Uranus and Neptune.

Time your launches right, and you can use the gravitational pull of one planet to slingshot you to another. If everything lines up correctly, you can even visit all the outer planets in a single grand tour.

Outer Planets builds on the rules of Leaving Earth, adding several new features, including: scientists who can study samples without having to bring them home to Earth, slingshot maneuvers that are easy to use (but only available during certain years), exploration that changes the available missions on the table, aerobraking as a dangerous way to perform maneuvers with much less fuel, and several new types of probes to explore icy surfaces and dense atmospheres.

Jupiter and its four major moons

sample from the surface of Io

Things you'll find inside the box:

This is an expansion, so it requires the base game to play.

Read the rulebook to see what's new in this expansion.

Keep up to date with news, reviews, images, videos, and session reports on BoardGameGeek.

back to Leaving Earth